A little explanation: An Austin paper (which will not be named) has an annual short story contest. Some years ago, I thought that I would give it a try and wrote up this true story about windmilling. The winning short story was a disgusting profane description of a teenager and his sexual disfunction. I have always hoped that I finished last in that contest.

We were working on a windmill in Centralia Draw north of Big Lake. Centralia Draw is a low valley at least two miles across which runs through the northern parts of Upton, Reagan and Irion Counties. It runs for about forty five miles eastward until it dumps into the Middle Concho River. Centralia does not "dump" very often, but on those rare occasions when there is a heavy rain in that part of West Texas, the draw turns into a raging river. It will wash away the fences and drown the sheep which graze there on the semi-desert range.

There are many windmills on the ranches of the area to supply water for the sheep. The floods might damage the windmills or wash trash into the wells causing the rancher to have to call the well driller to come and clean out the well. And he might have to call my dad to replace the pipe and sucker rods and do other repairs to the mill. My dad worked on windmills, installing and repairing them for most of his life. During the summers, he used me, his teen aged son, as his helper.

I particularly remember doing one of those flood cleanup jobs. We were almost finished, putting the last rod into the well, raising it up into the tower. I had my hand on the rod wrench with the rod inside the stand pipe. As the rod went up, the pipe stuck on the rod a little bit. My thumb was on top of the wrench and then the pipe fell a couple of inches and landed on my thumb nail. It was a little like placing your thumb between an anvil and a hammer. I could not sleep that night for the pain. The blood under the nail transferred the pressure from each heartbeat into a stab of pain in my thumb. The next day, dad suggested that I drill a hole through the nail to relieve the pressure caused by the blood underneath. I twisted a sharp pointed pocket knife on the nail until I had a hole through it. It did feel better after that and I began the long process of losing and growing a new thumb nail.

But I was going to tell another story about working in Centralia Draw. We were doing a repair to a windmill which was a repair on the motor. "Motor" is the term used for the gear box, the mechanism which converts circular motion to up and down motion. There is a platform on the tower close enough to the top to allow a person to reach the motor and change the oil. The platform is nothing more than four boards about a foot wide bolted onto the side of the tower. But if you need to get inside the gear box to replace a bearing or some such thing, you have to climb a little higher up onto the tail. Now you are sitting on the very top on a galvanized L beam about two inches wide. And all you have to hold on to is the motor itself. Never mind safety belts. I heard that other people used them but not us. 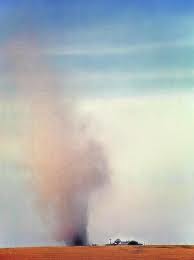 The windmill was turned off. A windmill is turned off when a lever is pulled at the ground level which pulls a cable and the wheel (fan) is pulled into the same plane as the tail. This way, the wind hitting the tail holds the wheel out of the wind. There is also a brake to hold the wheel from turning but this mechanism seldom worked on an old mill and on a windy day, we would usually chain the tail and wheel together to prevent a gust of wind from suddenly turning the gears. We probably had it chained that day. I stood on the platform and handed the tools and parts up to my dad as he did the work.

It was hot and dry as usual but there was something different about the weather that day. There were not any threatening thunder clouds but evidently the conditions were perfect for the forming of dust devils. Dust devils form most often where the sun is beating down on an area with few trees or other obstructions. The hot air near the surface rises up through the cooler air above it like a large bubble. The uprush of air causes the surface air to move in below and begin to spin. The resulting whirlwind is a dust devil and can last a few minutes or more than an hour. Air speeds up to seventy miles per hour have been measured in dust devils. These big ones will pick up a lot of dust, leaves, and whatever is lying loose.

We could see as many as four or five dust devils at a time from the top of the windmill that day. The big ones were a swirling impervious column the same color as the ground and reaching high above us. I was probably hoping that we could finish up in time and get down off the tower before one of them found us. Dad kept working and was not concerned, it seemed. In forty years of windmilling he had probably been through this before. Maybe he was even amused by it all, watching his young son worrying and watching. 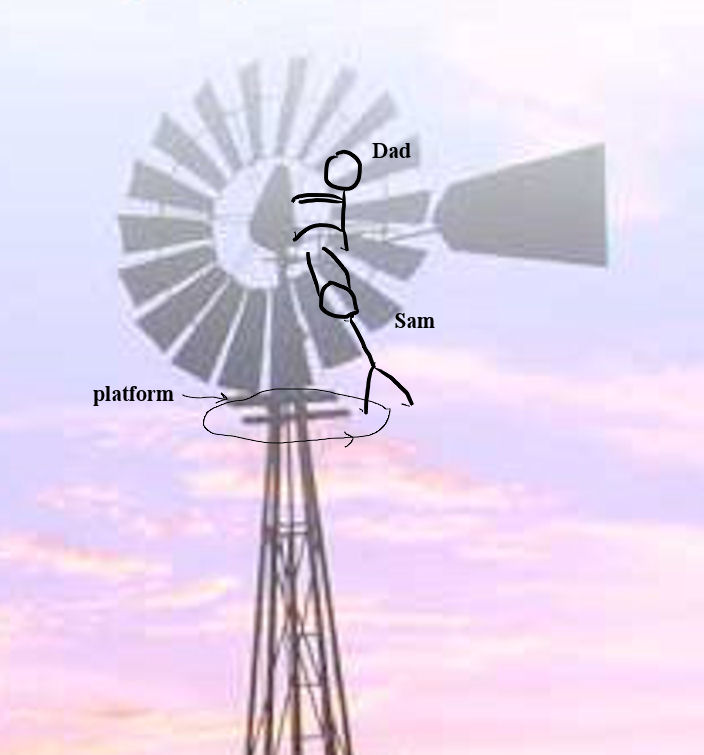 Here it came - one of the biggest ones of all. I remember that it towered over us and I remember seeing things swirling in the dust, mesquite limbs, probably. Now here is the real problem: If the windmill swings around on its vertical axis with the wheel and tail chained together, it will sweep anything off of the platform. I am standing on the platform. I need a place to go but there is none. Being on top, dad is actually in a safer place. I do not know if he told me to grab the tail or if I just instinctively did so. I grabbed the tail with both hands, raised my feet, and held on. It hit us dead center and I took a ride.

I have heard people say things like "Time stood still" or "Time froze". There are songs and poems that use these phrases. But really, there is something to the concept. Our brains vividly record some events of short duration and these events linger in memory and influence our lives, even the shortest events which should otherwise be discarded. I clearly recall the first wall of the swirl hitting us, my face stung from the blast and the windmill jerked to my right. There was a short pause and then the other side of the funnel swung us all the way around. I do not know where my feet were but they must have been swinging out away from the tower.

With my feet back on the platform, I tried to get the dust out of my eyes and mouth as I watched the dust devil recede from us and make its way down the draw. It looked even bigger and more powerful from the rear as the dust continued to tumble around us. I looked up at my dad sitting up there on top. He held on just fine. With his eyes squinting from the dust, he was grinning at me.

Earthquake.  Dad was camped out and sleeping on the ground somewhere in West Texas. He said that he felt the ground shake and knew that it was an earthquake. No one else felt it but the seismographs did. Next day's newspaper had a story of an earthquake.