We were working on a job; I think it was north of Mertzon. We were working up on the platform and so it was some kind of repair job or maybe we were stubbing a new mill on to the tower. A thunderstorm was approaching. Dad never liked for anything to interfere with the completion of a job - and this included the weather. We were bolting things together as the cloud approached ominously. The rain began to fall, it was getting too wet to continue and so, reluctantly, he gave the word to get down from the tower. We got into the truck to wait it out. We were probably only there for about a minute before the thunderstorm let go of the first bolt. 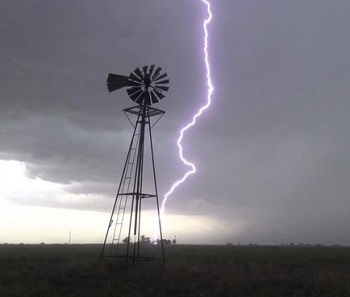 It is not true that lightning always hits the highest object and neither is it true that it has a strong preference for metal objects. But there was no doubt in this case what the bolt of lightning hit. As we peered through the windshield, the tower lit up in front of us in an amazing explosion of light and sound. Our eyes may have been blinking and our ears ringing but we were all right because the inside of an automobile is a pretty safe place to be and because we got down from that windmill tower when we did.

After the rain subsided, we climbed back up and finished the job. The grease on the outside of the gear box was burned and it stunk something awful. Maybe I was wondering if my flesh would have stunk the same way if we had stayed up on that tower a minute longer. Dad was probably just irritated that we were delayed for a while. 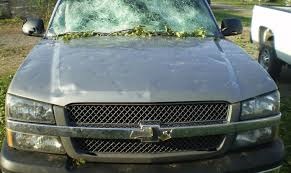 I do not remember ever getting caught in a serious hail storm while working on windmills. But I do remember what happened once when we were pulling sucker rods a few miles northeast of Iraan. We were up on a hill with a view toward Iraan and the Pecos River valley. There was a thunderstorm that dropped some rain on us but the main part of the storm was toward Iraan. There arose a terrific roar from the cloud in that direction. I had never heard anything quite like that sound, and Dad said, "They are getting a big hail storm in Iraan". After we finished the job, we had to make a trip into Iraan. Sure enough, there had been an awful hail storm which had bashed the roofs of buildings and put big dents in vehicles. I learned that day what a hail storm sounds like from a distance.

It has been observed by me and others that one can drive into a West Texas town and tell if there has been a hail storm in the past year or two. Many of the vehicles will have the dents which tell the story.

There are plenty of stories about how big the hail stones were in storms but my dad had a story that tops them all. He said that he was working on a job when it started to rain. He and his helper got under a tree. He heard a hail stone crash down through the tree. That chunk of ice hit the helper on the shoulder and dislocated the shoulder. Dad had to drive him into town to the hospital.

It was May 11th, 1953. We were aware of tornado warnings all day. I was a sophomore in high school and I was in English class about 2:30 in the afternoon when the storm hit. The power went off and the rain was pouring like water falling from a bucket. It was not possible to conduct class any longer and I remember that the teacher allowed us to stand and stare out the window at the most fearful storm that we had ever seen. This seems odd now looking back on that day because later, all the schools had regular tornado drills as well as fire drills. We should have been crouched down in the hallway away from the windows according to the training we got later.

My next class, the last class of the day, was mechanical drawing. The lights were still out and class was not possible. I remember the sirens. Every emergency vehicle in town was headed north up Chadbourne street. We even saw an ambulance from Goodfellow A. F. B. headed the same way. Then word began to be passed around about a terrible tornado that had hit in the Lake View area on the north side of San Angelo. The stories were grim about the devastation and everyone had someone to worry about, a friend or relative living in that area.

The next day, the newspaper had the story with pictures and estimates of the damage and the number of dead and missing. Lots of folks wanted to go to the area and help, or just to look, but the area was blocked off by the National Guard. My father got a phone call from someone asking him to represent an insurance group. They commissioned him to go and estimate the damage to windmills. He took me with him and so it happened that we were two of the very few people who were allowed into the devastated area on the day after one of the most powerful tornadoes ever recorded. Assessing the damage to windmills turned out to be easy - they were all destroyed. The vanes were pulled off and the tower twisted to the ground.

Dad had erected most of these windmills and the owners were his customers, people he knew. I remember that people were mostly acting like they were in shock as they poked through the wreckage of their homes. And everyone had a story about how bad it was. Oddly enough, many of the stories they told were humorous: Someone's horse wound up in someone else's pen two blocks away; some guy was on the toilet when his house blew away. But what we saw was not funny, it was mind-boggling destruction. There was one entire block where the tallest thing standing was a toilet sitting on an otherwise bare foundation. The highway was covered with a drive-in theatre screen and there were cars and trucks in every orientation where they had been rolled off of the road. The Red Cross was there and the Salvation Army. I think we stayed until dark helping people turn over wreckage as they looked for their belongings.

The news did not get any better but it was surprising that only about 17 (actually 11, see below) people had lost their lives. We learned that another tornado had hit Waco Texas the same day as our tornado and 60 or 70 people had died (actually many more, see below) in that one. Many years later, I was browsing in the Auburn Library and came across a book on tornadoes. I looked in the index and found San Angelo. I read that the storm that hit Lake View that day was one of the widest funnels ever recorded and one of the highest estimated wind velocities. 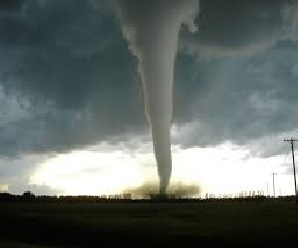 It is not often that you get a clear look at a tornado or "twister". The small tornadoes are called twisters. But there was one very memorable occasion when we were finishing up a job and loading up to head back to San Angelo. There was an ominous cloud to the north of us and we saw a funnel develop and gradually extend down to the ground. And then another twister appeared and it too wound around and down. It appeared that they were taking turns picking up for a while and poking back down in a surreal sort of dance.

This was taking place on the neighboring ranch. Later, dad asked the owner of that ranch if he had any damage and he said that there was a fence that was torn up - that was all.

I have described here some of my memories of encounters with the extremities of West Texas weather, dividing the account into different aspects. What is obvious about the weather of the times was the worst drought for half a century which lasted from about 1952 until 1957, a period which mostly contained my windmilling career. But in the middle of the drought was a flood and I describe the "Flood" portion of this narrative elsewhere in a description of the tragic flood of Ozona in1954.

Returning to the Lake View tornado, the following is taken from the New Handbook of Texas, a publication of The Texas State Historical Association: See their website at http://www.tsha.utexas.edu/

Not until May 11, 1953, would a single tornado kill so many Texans again. (Referring to a tornado in Goliad, Texas in 1902). This time there was a warning. The weather bureau announced that tornadoes were a possibility somewhere along a line extending from San Angelo to Waco. Early that afternoon a tornado swept through three miles of small houses in the Lake View portion of San Angelo, and later another funnel twisted through five miles of Waco. At San Angelo, eleven persons were killed and 159 were injured; the damage amounted to over $3.25 million. At Waco, immune to tornadoes according to an Indian legend, losses were much greater. In a two-mile square of downtown Waco, buildings were lifted by the funnel and dropped in masses of broken bricks, splintered wood, and crushed plaster. Tons of glass flew through the air. Within seconds the business district was wrecked, left in a pile of debris. Some 196 business buildings were demolished, 376 others were damaged to the extent that they were unsafe, 2,000 automobiles were damaged, 150 homes were destroyed, 250 other homes were seriously damaged, and an additional 450 homes were less seriously damaged. Total damages cost $51 million. A total of 1,097 persons were injured and 114 perished, the same number as in Goliad half a century earlier.

flat tires. We finished a job south of Mertson and as we were loading up noticed that we had a flat tire. So we put on the spare and headed up the dirt road to Mertson. Then another tire went flat. It was still miles to go but the two of us went up the road rolling tires. Fortunately, a rancher came by and hauled us and our tires to the filling station in Mertson.