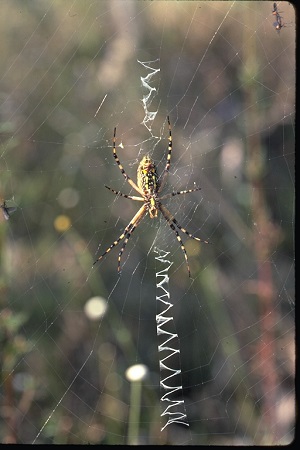 In about 1995, I was reading a scientific magazine when I came across an article based on a paper by Thomas Eisner and Stephen Nowicki entitled "Spider Web Protection Through Visual Advertisement: Role of the Stabilimentum". A brief abstract of the paper is as follows: The conspicuous white silken adornments known as stabilimenta, which are commonly found in the orb webs of some spiders, appear to be protective devices that warn birds of the presence of webs in their flight path. Webs endowed with artificial equivalents of stabilimenta tended to survive intact the early morning period when birds are on the wing; unmarked webs showed a high incidence of destruction (from Science Magazine, 1982).

OK, go ahead and visualize a light bulb over my head. I immediately thought that this is the way to keep birds from flying into windows. Just put a stabilimentum on the window. This could be an invention! If I put a stabilimentum on the window, a bird will think that there is a spider web there and will avoid flying into the window. I will tell the story here of the invention which came from my light bulb moment but meanwhile, here is the title and abstract of U.S. Patent # 5588251:

I already owned one patent and never did anything with it in terms of trying to make a buck with it. I used a patent lawyer for that one but I did not want to go through that again with the patent lawyer. Instead, I bought a book entitled Patent It Yourself by David Pressman. This book was perfect for me. The author described in detail just what to do in terms of submission of the application, getting help from the patent office, which forms to fill out and when to do it. But most of the book was about how to do the technical writing, but I already know how to do technical writing. The two most important things are (1) to do a very thorough search of the patents to report on the previous art and methods and (2) write the claims. The patent examiner helped me with the claims. It was all kind of fun, actually, and the U. S. Patent No. 5588251 was issued on December 31, 1997.

But long before the patent was issued, I was already busy exploring how to go about selling the thing. There was a printing company in Auburn, AL that printed decals. I got together with someone there and we eventually worked out a deal. They would make a certain number of static cling decals at a certain cost. I was now ready to start selling when I went to the bird show.

The bird show, in Atlanta, GA was an annual gathering of manufacturers and merchants involved in the bird industry. I am talking about bird seed, bird feeders, books, art, binoculars, and so on. I reserved a booth at the show and then went to work trying to figure out what to do with my booth. I had some decals to exhibit, some colorful handouts and a slide show running on a monitor which explained why the decal works. I had a pretty low-class booth compared to the professionals who were all around me, of course. I was set up to take orders from the merchants who came by my booth and I was greatly encouraged when a dozen or so ordered some decals.

I think that the show ran for two days and as the show was winding down and only a few people were left touring the booths, a lady came to my booth and sat down to talk to me. She was head of a company called Droll Yankees. She liked my decal and wanted Droll Yankees to have the exclusive right to sell it. Wow! I did not expect this! I did not commit myself at the time. I had to decide whether to take the offer or develop the business of selling the thing myself. So, I went home and filled the orders of the stores that bought from me and found out more about Droll Yankees. Droll Yankees makes bird feeders and many other bird related products which almost every bird store sells. I eventually decided to sign the contract with Droll Yankees. They will sell it and pay me a royalty of 7% of the gross sales. 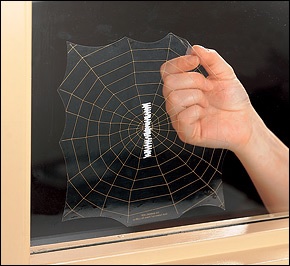 So now I had nothing to do but cash the royalty checks which came in at the end of each quarter. D.Y. called the item the "Warning Web". They sold it online and placed it in bird stores all over the country and the royalty checks came in until the patent expired last year (2018). You can now buy the Warning Web at various stores including Walmart, and a chain store in England. Online, you can get it at Amazon, eBay and The Nature Conservancy. If you Google Warning Web, you will see for yourself. Here is an add for the Warning Web by a Canadian hardware chain called Lee Valley.

I used to get a few cents for each one sold but not anymore. The image on the decal has never changed. I drew that image with my own hand and it is a kick to see something that I drew myself being used all over the place.

Some memories and remarks: